by Cansu Koca - ckoca@chemorbis.com
Import PVC prices in Asian markets plunged to a more than a decade-low in late April-early May following several weeks of sharp declines.

Prices have rebounded since then and already regained more than half of what was lost in the downturn.

As the second quarter is coming to a close, the firm sentiment for PVC continues to be supported by several bullish factors. However, players are now divided over their outlooks for Q3. Much of the division stems from estimates of the likely strength of demand as India’s monsoon season coupled with growing fears of a second wave of COVID-19 infections across Asia are casting doubt over whether demand will be strong enough to absorb fresh rounds of price hikes.

A deeper look at what PVC went through in Q2

In Asia, the coronavirus outbreak started to rattle the markets in the first quarter of the year, but it had its most devastating impact on PVC prices during the first half of the second quarter.

A major Taiwanese producer - which often leads the market in setting monthly prices - announced its April PVC offers with $50/ton decreases following three consecutive months of hikes. When it came to May, the producer approached the China market with a significant drop of $160/ton while, in a rare move, they skipped offering to India highlighting the scale of reduced demand amid COVID-19 lockdown measures.

China became the first country to come out of its lockdown in the first half of April, hence it experienced a demand recovery ahead of other Asian countries. Improving demand from China started to help reverse the bearish price trend in around mid-May.

Following two months of sharp declines, the major Taiwanese producer approached the Asian markets with increases for June and July, lifting its PVC offers by $40/ton and $90-100/ton, respectively.

According to the weekly average data from ChemOrbis Price Index, CIF China/India PVC K67 prices for overall origins lost 29-31% during the downturn between mid-March and early May while they have regained around 70% of their lost ground until now.

Data also suggest that both markets currently stand at their highest levels since the last week of March. 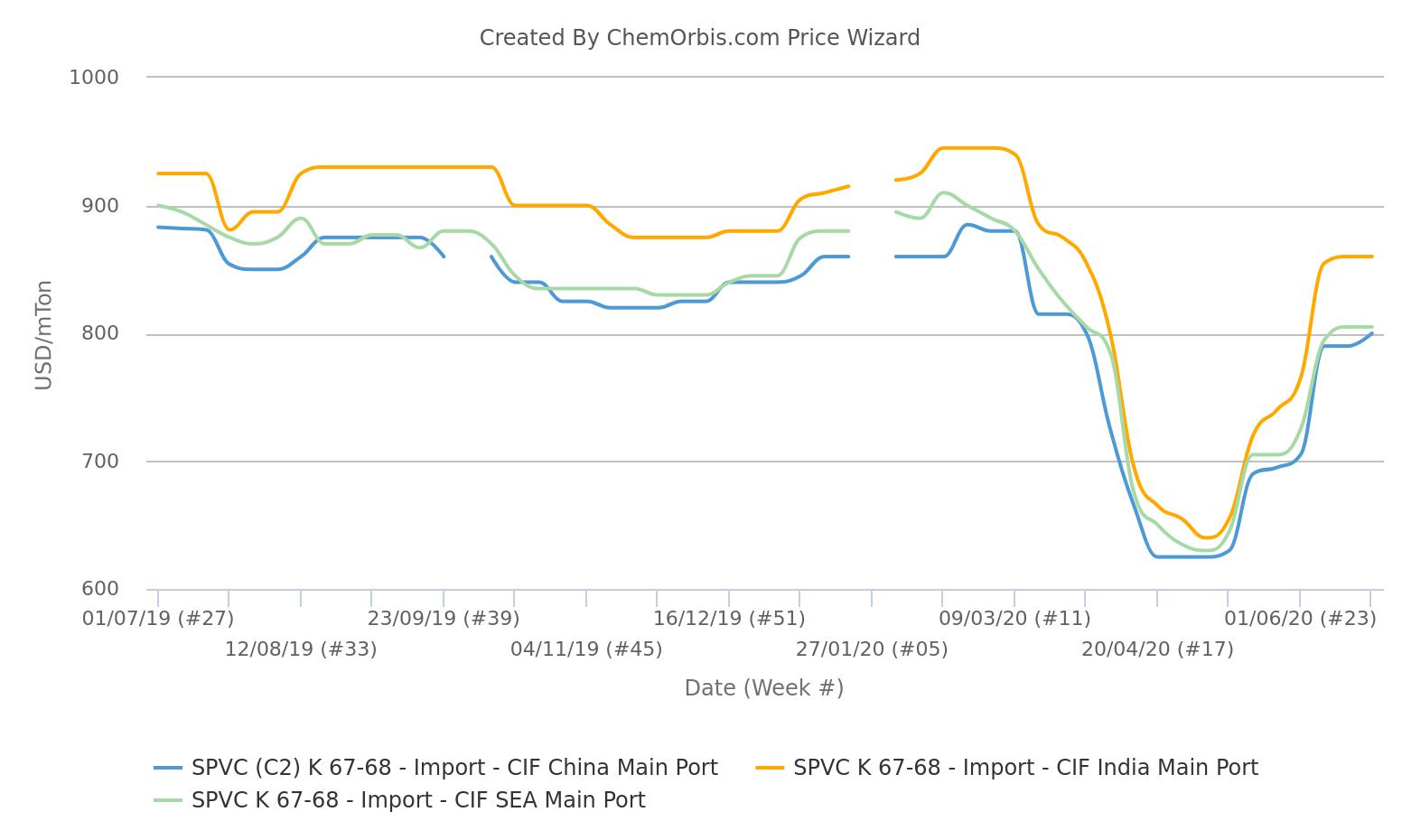 “The upside should still be supported by a series of bullish factors including tight availability, rising upstream costs and strong China demand. The sentiment is likely to remain firm over the upcoming term,” most players noted.

According to data from ChemOrbis Price Wizard, spot ethylene prices on CFR China basis are currently hovering around a nine-month high while spot VCM prices on similar terms are at a three-month high.

Sellers operating in China and across Asia confirmed this week that firm demand from the country remained intact amid tight levels of supply. “Prices have not seen any major changes so far this week as the market is now awaiting the major Taiwanese producer’s August announcement for price direction.

Considering the continuing presence of the bullish factors, we would not be surprised if the producer revealed a price hike for the third month in a row,” a trader in China opined.

On the other side of the coin, some players take a more cautious approach.

"The market may not consolidate to digest beyond the sharp gains over the past two months, especially with India going deeper into the monsoon season which tends to weaken demand. On top of that, a potential second wave of COVID-19 cases may result in restrictions and impact on shipments,” they warned.

Caution has also emerged in Vietnam. “Local prices are really high and not many people are interested in these levels. Our end-product demand has dropped 20-30% because of the rainy season. Prices may not go up much next month or may even drop,” a Vietnam-based converter said.